A recent opinion piece by Terry Smith in the Financial Times of 23rd May 2015 about global fast food giant McDonalds raised an eyebrow.

The news release about the plan included the following content, “driving operational growth, returning excitement to our brand and unlocking financial value… the first critical step of our operational growth led plan is to strengthen our effectiveness and efficiency and drive faster and more customer-led decisions… restructure the business into 4 new segments… create strategies which leverage our scale and competing power…”.

Smith’s comments on the news release:

“Note that the word “food” was entirely absent from the release and the word burger was only mentioned once, as in “burger company”…”

And tellingly, he offered this piece of advice:

“I think the first thing that McDonalds needs to address is whether its target customers like the food it sells, and if not, figure out why this is and what it can do about it…”

Great business advice for any food business operator, and scary that it can be so easily lost sight of. 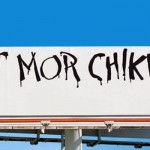 The End of Beefburgers?
We use cookies to ensure that we give you the best experience on our website. If you continue to use this site we will assume that you are happy with it.YesNo