There has been a decline in per capita beef and veal consumption caused by the EU economic crisis and reduced supply, according to UK red meat body AHDB Beef & Lamb.

Beef and veal performed relatively well during much of the 2000s, once demand had returned to normal after the BSE crisis on the continent. But there was a downturn in supply availability in 2008 and again in 2012 and 2013.

EU data showed that per capita consumption of beef and veal amounted to 10.6kg retail weight in 2014. This represented a reduction of 1kg, compared with 2009, and was also less than the average figure of 12kg per annum in the 2004-2007 period.

The result is that it has lost out to poultry meat. Over the same period poultry meat increased its market share from 29% to 33%, per capita consumption in retail weight (22 kg) – almost double that of beef and veal. 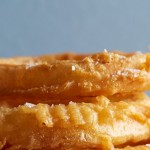 Tip for Perfect Real Onion Rings
We use cookies to ensure that we give you the best experience on our website. If you continue to use this site we will assume that you are happy with it.YesNo